Compound interest: You hear it a lot, but what is it and how can you profit from it? Those questions get asked to us very regularly, and there are a lot of good reasons to start generating compound interest. Compound interest essentially means: making money by putting money to work. How? We’ll explain.

Believe it or not, the greatest asset one can have when investing is time. Take a look at this infographic below. Ben starts investing at the early age of 19. He puts $2000 in an S&P 500 ETF each year. He keeps doing this until the age of 27. He has now invested $16,000 in an S&P 500 ETF. Arthur starts later, at the age of 27, and like Ben, he also puts $2000 each year into an S&P 500 ETF. Arthur keeps doing this until his retirement, while Ben completely stops investing. At the age of 65, the 2 friends are retiring and surprisingly Ben has about $700 thousand more than Arthur. This perfectly describes the power of compounding. 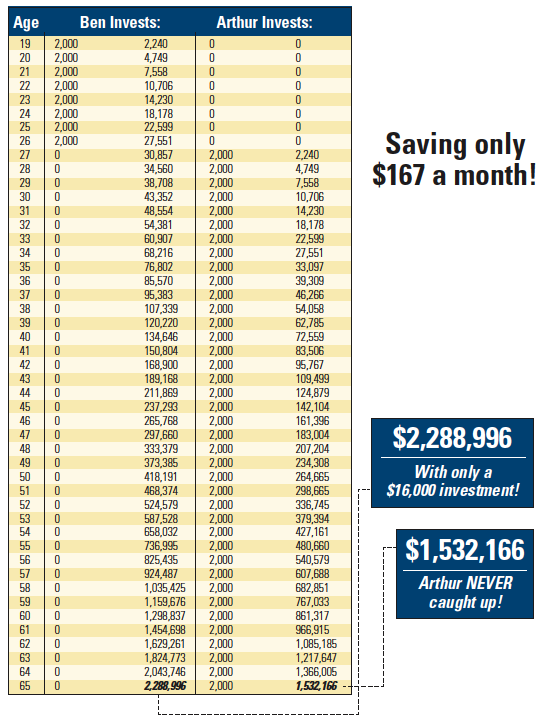 The earlier you start your investing journey, the longer your money can work for you. No wonder Albert Einstein has called compounding “greatest mathematical discovery of all time.” The earlier you start to realize that, the better. With compounding, anyone can become financially independent or a millionaire, as long as he lets his money work long enough.

Since the existence of the S&P 500 index, it has had an average annual  return of 9% per year. Of course, this varies yearly, but the average return including depressions and meltdowns is 9%. Theoretically, if you’d put in $1000 in an S&P 500 index fund last year, it would now be worth $1090. If you keep it in there for another year it will be worth $1188. Leave it in another year and it will grow to $1295. This will keep going on for as long as you’ll leave the money in the index fund. The money literally works for you. The more you put in at the very beginning the bigger your fortune will grow over time.

What’s more important to remember is that the first part is the hardest. Just take a look at the infographic above: When Ben was 21 he made almost $3000. When he was 60 he made more than $150,000. The bigger your time horizon, the bigger rewards you’ll reap in the long run.

We know that as a young investor you’re always on the lookout for a cheap stock to buy, to make a quick buck. However, research has proven that timing the market is actually less rewarding than just starting now. There is a saying that goes: “The best time to invest in the stock market was yesterday.” When time is on your side, compound interest will do the rest.