The Gianni Versace Company debuted in 1978 in Milan, Italy. Mr. Versace’s mother, Francesca, was a successful dressmaker with her own business. At a very young age, he began his apprenticeship in women’s fashions in her employ. He studied design before relocating to Milan at the age of 26. In the mid-70’s, he was hired by another fashion house to design leather and lace. He was so successful that a few years later he presented his first line of women’s fashions at the Palazzo della Permanente Art Museum of Milan. This was followed by a fashion show that same year. He shortly thereafter presented a line of men’s fashions as well, and opened his first Versace boutique in Milan’s Via della Spiga in 1978.

The logo of Versace is the famous “Medusa Head”. It’s a worldwide symbol for luxury and fashion. Popular rappers have gone as far as creating big chains of the Medusa head, encrusted with diamonds and gold. 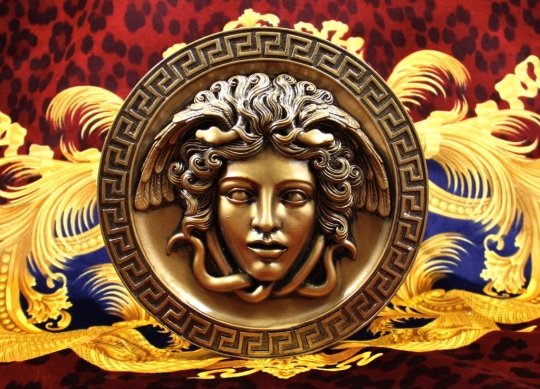 In 1994, actress Elizabeth Hurley wore a black dress of Versace design, which resulted in international attention and acclaim. He had many high-profile personal friends in the music business as well, and was the first designer to make his mark in the music world. He has also designed for theatre companies and the film industry.

He did not confine himself to clothing design alone, however. His fashion house currently produces a varied collection of products, such as make-up, fragrances, designer accessories, and even home furnishings. Versace was both talented and prolific, as evidenced by his collaborations with Lamborghini and architectural designers. As a young man, he had an avid interest in Greek architecture, and had studied Greek and Latin. In 1979, he even collaborated with Richard Avedon for his company’s first photography campaign. This was the first of many collaborations with Mr. Avedon, as well as many other prominent photographers.

In 1982, Versace invented a metal chain-mail, known as “Orton.” This was first launched as part of his design presentation at the Paris Opera. At this time, he also began designing ballet costumes for the La Scala Theatre in Milan. He has won numerous design awards, including the American Fashion Oscar in 1993.

Tragically, Gianni Versace was shot and killed on July 15, 1997 in Miami Beach. He was 50 years old. He was cremated, and his ashes were returned to his family’s estate in Italy. He had a strong sense of family, and his fashion house remains family-owned. In September of 1997, his brother Santo and Jorge Saud assumed control of his company as CEOs, and his sister Donatella took over as head designer. Donatella Versace is also the recipient of fashion awards, so Versace’s legacy is in good hands. The company remains a phenomenal success. Versace designs are worn by Hollywood stars and society’s elite.

As of 2011, there were 81 stores worldwide, and multiple retail areas in high-end department stores. Versace’s company has been in existence for more than 35 years, and has forever changed the world of design in multiple areas. Gianni Versace was a true innovator.