We are always intrigued and fascinated about the history of designer brands. Today we will talk about one of the most iconic and recognizable logo’s in the history of Fashion. We’re talking about the Stone Island patch.

Ever since Massimo Osti founded the brand in 1982 it has been associated with this patch (also called badge or label). The patch has a yellow/green compass on it, surrounded by the text “Stone Island” in green coloring. The patch is buttoned on the upper left arm sleeve of hoodie’s, jackets, jumpers, sweaters and other Stone Island clothing. On jeans the logo is buttoned on the right back pocket. The Stone Island patch can be recognized from miles away, and it can not be bought separately from a jacket or sweater.

You can not buy a real Stone Island badge separately from the clothing. You can however buy Stone Island clothing here, and get a patch with it. If you’re solely out for the badge you could buy a cheap garment so you have the badge that you can use to customize your own clothing with.

Since the existence of the designer brand, the patch has come if various variations. In the beginning the Stone Island patch had a green border around it, and it became a full black border later on. The Patch also has a full black and a white edition, a special 30 anni version, and a black patch with a white compass instead of the usual yellow/green. You can view a few of the different versions of the patch below: 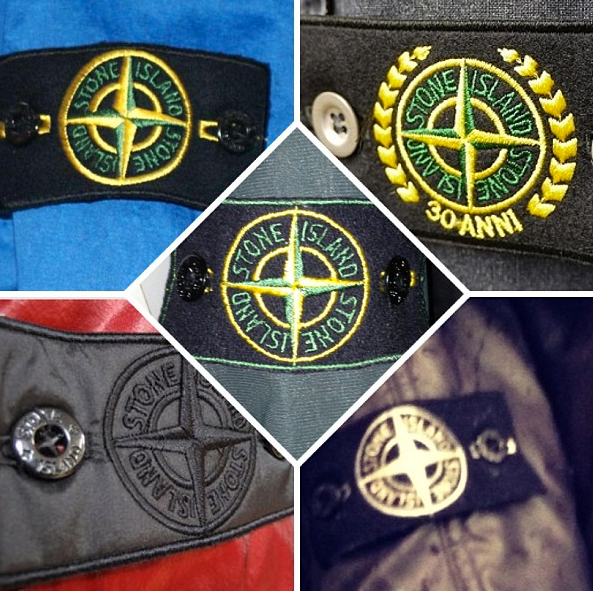 We also get a lot of question like: should I wash my patch?, or should I put my badge in the washing machine? The answer to this question is a big no. The reason for that is that the materials of the patch will become very soft, and then the badge will start to hang, instead of a good formed patch which fits nicely on the buttons. You can easily remove the patch from your jacket before you put it in the washing machine by unhooking it from the buttons. This will make sure that your designer garment will stay in a perfect condition.

The Stone Island patch does not come with a SI Polo. If you see someone wearing a SI Polo with a badge, you will know that it is fake. The Stone Island Polo’s only have a squared label with the compass rose on it, as you can see in that article. Please don’t get fooled by anyone selling fake’s, and buy the designer clothing at their official stores or Online.